Dave Coulier informally began his career at a young age, doing impressions of neighbors and friends. He cites both grandmothers as strong comedic influences. His parents, an interior decorator and a foreman at Chrysler, disapproved of his comic leanings, and considered him a mischief-maker.

In 1973, Coulier began attending Notre Dame High School, an all-boys Catholic school in Harper Woods, Michigan. The avid hockey player capitalized on his mimicry skills, and performed perfect impressions of various teachers and even his principal, over the school's public address system. Dave feared he'd be punished, but was instead rewarded for his talent.

Paired with close friend and fellow humorist Mark Cendrowski, the duo was encouraged to write and perform comedic sketches, and became responsible for the school's morning announcements. Soon, he expanded his stomping grounds, and put together sketch comedy shows for Notre Dame's all-girls sister school. He also began performing stand up at Detroit's Comedy Castle; comedian Tim Allen worked at the venue, and the two aspiring stars struck up a friendship.

Two years after his 1977 graduation, Dave Coulier moved to Los Angeles to pursue stand-up comedy in earnest. At 19, he became a regular performer at the Comedy Store and decided to make a voice-over demo. Writing, producing and voicing his own material, he sent the reel to Hanna Barbera Studios, and was hired within the week.

With the beginnings of a voice-over career in place, Dave began to focus on acting work. After landing a part in Cheech and Chong's Things Are Tough All Over, he began earning character roles on shows like Newhart and performing stand up on A&E's Evening at the Improv. In 1984, he was cast in Nickelodeon's Out of Control, a faux, late-night show for kids. The wacky program lasted less than a season, but the show and Dave's signature catchphrase, "Cut it out" became a cult favorite.

In 1987, Dave appeared on The Tonight Show, and landed several voice-over roles on the animated series, Muppet Babies. Most notably, he was cast as Joey Gladstone, Bob Saget's crazy best-friend on the series Full House.

As Full House enjoyed nationwide popularity, Dave Coulier became a voice-over artist on the animated The Real Ghost Busters. In 1990, he was also cast as the host of ABC's America's Funniest People, a home-video show featuring silly and outrageous video clips, as well as Dave's own sketches. That same year, he met actress Jayne Modean on the set of Full House. The couple quickly married, and their son, Luc, was born on November 14; they divorced two years later. Not long after their split, Dave dated up-and-coming singer Alanis Morissette.

Dave is proud of his "clean," family-appropriate humor, and founded a multimedia organization called The Clean Guys of Comedy. Ironically, he recently admitted that he might be the inspiration behind Alanis Morissette's contemptuous single, "You Oughta Know." He continues to be an avid hockey player, and is a member of the Celebrity All-Stars team.

Dave was the voice of both Cosmo and Jack in the first episode he ever directed: Nutcrackers. 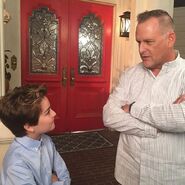 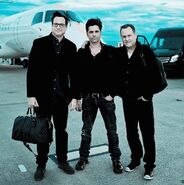 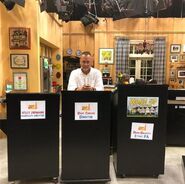 Add a photo to this gallery
Retrieved from "https://thefullerhouse.fandom.com/wiki/Dave_Coulier?oldid=121180"
Community content is available under CC-BY-SA unless otherwise noted.