After booking several national commercials, she was cast in a guest spot on the series Valerie. At the age of 5, Jodie Sweetin debuted as Full House's Stephanie Tanner, the middle sister of three. Her catchphrase "How rude!" is still requested by fans. That same year, she was cast in Jim Henson Presents: Mother Goose Stories.

Although she quickly bonded with her Full House family, Jodie had a difficult time adjusting to school. A strong student, she was teased by classmates for her burgeoning fame. She spent her grammar and middle school years trying to embrace a normal life and separate herself from her on-screen persona. At the age of 13, she entered Los Alamitos High School. That year, Full House was cancelled, and Jodie experienced her first brushes with alcohol abuse.

After graduating in 1999, Jodie temporarily capped her acting career with a two-episode role on Party of Five. She began attending Chapman University in Orange, California, and although she had an academic scholarship, she rarely attended classes. Instead, Jodie's hard-partying ways earned her a .9 GPA, and stanched her scholarship. She returned to her parent's house to break her ties to drugs and alcohol, and to refocus her life.

Both of Jodie's daughters Zoie Herpin and Beatrix Coyle have appeared as extras in episodes of Fuller House.

Jodie made her directing debut during season 5 of Fuller House.

Jodie as a crew member on Fuller House 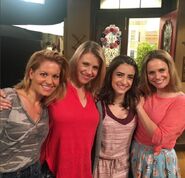 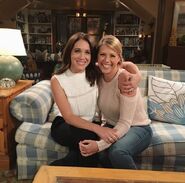 Add a photo to this gallery
Retrieved from "https://thefullerhouse.fandom.com/wiki/Jodie_Sweetin?oldid=126324"
Community content is available under CC-BY-SA unless otherwise noted.