Kimberley Drummond migrated to the USA with her mom at the young age of four. While attending school, Kimberley began dance classes as a hobby and fell in love with the stage that made her want to learn everything about it. After performing in a 3rd grade production, she immediately found her passion. She started acting at a very young age and was determined to give it her all from the very beginning. She attended Middle & High Schools for Performing Arts in South Florida. After graduating, she was accepted in the New York School for Film and Television Conservatory where she studied her on-camera training.

Continuing her studies with local coaches in New York City, her hard work paid off when she landed the supporting role as Taqua in the Independent film Mooz-Lum.

Kimberley has made a few appearances on television shows such as Drop Dead Diva & Stuff You Should Know. She landed a role on the critically acclaimed Hunger Games franchise in Catching Fire as Rue's Aunt. 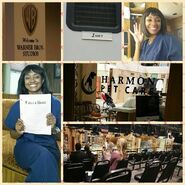 Add a photo to this gallery
Retrieved from "https://thefullerhouse.fandom.com/wiki/Kimberley_Drummond?oldid=107801"
Community content is available under CC-BY-SA unless otherwise noted.