Landry Bender (born August 3, 2000) is an actress best known for playing the role of Cleo Bernstein in the series Crash & Bernstein, and playing Blithe Pedulla in the 2011 film The Sitter. She plays one of the lead roles, Cyd, in the sitcom Best Friends Whenever and has a recurring role as Rocki Mahan in Fuller House. 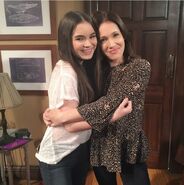 Add a photo to this gallery
Retrieved from "https://thefullerhouse.fandom.com/wiki/Landry_Bender?oldid=127029"
Community content is available under CC-BY-SA unless otherwise noted.