An addition to the house. A family business. An amazing birthday race. Wedding proposals. A flash mob. A Thanksgiving flashback. An eating contest. A live-streamed game show. Tearful memories. A She-Wolf triple wedding. An emotional goodbye, and a big surprise.

Relationships are in bloom in the Tanner house. D.J. and Steve (Scott Weinger) are going strong. Stephanie and Jimmy (Adam Hagenbuch) are engaged. Kimmy and Fernando are both divorced and engaged. Jackson and Rocki (Landry Bender) together again. Ramona falls head over heals in love at first sight for Ethan (Noah Alexander Gerry). Matt (John Brotherton) and Gia (Marla Sokoloff) come back from Las Vegas as newlyweds.

When Fernando and Jimmy find out their favourite sandwich shop is going out of business, Steve puts up the capital so they can buy Uncle Monty’s Sandwich Emporium. Steve plans a girls vs guys Amazing Race themed game for D.J.'s 40th birthday. Stephanie write a song for her daughter and plays it for Lisa Loeb. Kimmy dates a few losers and Kirk Cameron before making her way back to her true love. Jackson qualifies for the Rocket League NorCal Finals. Ramona spends all her time with her new boyfriend, Ethan. Max plays detective in order to discover Rocki and Ethan's secret.

In preparations for their upcoming triple wedding, D.J., Stephanie, Kimmy, and Fernando head to the Lower Nob Hill Bridal Expo. They wind up walking the runway, to get a discount on their wedding dresses. While visiting University of California D.J. and Jackson pull off a heist. Max has an identity crises. Ramona trains to defeat the reigning champ of a high-stakes eating contest. Jesse turns a play-date into a sting operation. A week before the wedding Kimmy and Fernando, along with Stephanie and Jimmy, announce they will be moving out after the wedding. 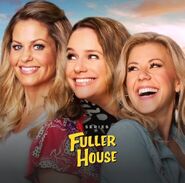 Add a photo to this gallery
Retrieved from "https://thefullerhouse.fandom.com/wiki/Season_5?oldid=126340"
Community content is available under CC-BY-SA unless otherwise noted.